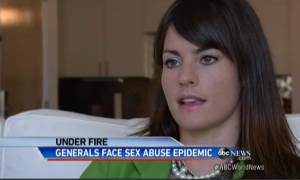 Transcript for Sexual Assaults in Military ‘Like a Cancer’

It’s a showdown in Washington. Senators outraged by all those reports of sexual abuse in the military and saying one measure of a problem is in this picture. Virtually every person testifying for the military today was male.

Abc’s chief global affairs correspondent, martha raddatz, has more. Reporter: They are the nation’s most senior officers, all men, now forced to battle a new enemy. The epidemic in their ranks targeting mostly women.

We have failed to address these crimes in a compassionate, just, and comprehensive way. It is shameful and repulsive. And we are aggressively taking steps to eradicate it.

Reporter: The numbers are sobering. An estimated 26,000 sexual assaults a year, and in just the past few weeks, high-profile scandals. The head of a sexual assault response office charged with sexual battery, a soldier accused of secretly videotaping female cadets in the showers, three naval academy football players accused of rape.

Leading the charge for change today, female senators who want victims of abuse to report the crime to special military legal authorities instead of their commanding officer. You have lost the trust of the men and women who rely on you. They are afraid to report.

They fear the retaliation. They fear being blamed. This isn’t about sex.

It is about assaultive domination and violence. Reporter: But the chiefs argued they must be the ones to police their own ranks. Command authority is the most critical mechanism for ensuring discipline, accountability, and unit cohesion.

Not every single commander can distinguish between a slap on the ass and a rape. Reporter: Watching all of this from afar, SARAH PLUMMER, a former Marine, who was raped by a fellow marine. She describes reporting the crime to her commander.

“It is like saying a brother or sister has assaulted or raped you, and then your father or mother is the one legally deciding the case. I don’t even think it’s reasonable to expect someone to be impartial, which is the foundation of our legal system.”

Reporter: Many of the senators voiced outrage today over the sexual assault, but SENATOR john McCain said he was so disgusted, that when asked by a woman whether he could give his unqualified support for her daughter’s desire to join the military, he said he could not.

[Not part of transcript: THANK YOU to each an every one of you who have supported me on this journey!!! <3 Sarah] 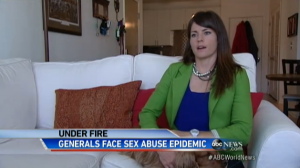 Other interviews on sexual assault in the military:
– NBC Nightly News with Brian Williams — you can watch it HERE
– HuffPostLive — watch HERE

I am a corporate and personal holistic health & lifestyle coach and yoga instructor because these practices have been CRITICAL in healing after my own traumas.  Now I teach these healing arts and instruct others around the world through my “Just Roll With It” workshops, keynote speeches, retreats, and book.

Would you like to join me in COSTA RICA?  Only 9 spots remain for my retreat 20-26 July. Deepen your practice in paradise! 🙂

Morning practices will be enlivening, powerful, & dynamic and led by the lovely Lisa Schlelein Theis and tunes spun by “DJ Cosmic Professor.”

Afternoons will be filled with non-yogic adventures designed to challenge you and open your mind, body, and spirit. All meals are included and are local, organic, yummy, and healthy. Integrative nutrition counseling, as well.

Evening yoga lead by me will generally be gentle, restorative, calming. Not your typical “yoga retreat.” PURA VIDA on the west coast of Costa Rica.

Seriously great for beginner to expert yogis, wanderlusters, and adventurers. Join us at the Costa Rica Yoga Spa July 20-26th!  🙂