Sarah Plummer’s favorite pose is Warrior 2. This is hard for her to admit because it’s an “easy” pose, and well, Sarah is type-A born and bred, and sees everything as a competition…at least, she used to see everything that way.  But a warrior, Sarah is.

Born in Japan to a military father and teacher mother, she was a competitive athlete from the age of five, and continued with that lifestyle through her time at the University of Virginia and seven years Active Duty service in the Marine Corps.  Although she first dabbled in yoga more than a decade ago, it wasn’t until yoga saved Sarah’s life on her second deployment to Iraq in 2006 that an all-levels change began to take place.  Then, when Sarah became a yoga instructor, another huge — peaceful — shift occurred.  Things that used to bother her simply didn’t anymore, and she was inspired to write the book, “Just Roll With It,” to capture a piece of the yogic wisdom that empowered her to transform her hardships into blessings and open opportunities to serve others in a whole new way.

Sarah is still an athlete, having played for the US Military Olympic Women’s Soccer Team from 2007-2011 and for the Australian Rules Football Women’s National Team in 2012, but she’s much…more…laaaaaaid…back about it all now than she ever used to be.  Stress almost killed her on numerous occasions, from a shoulda-been-deadly car crash in 2002 to a mini-stroke in 2010.  Plainly put, yoga helps Sarah keep the peace.

Although her personal definitions of these terms have evolved over the years, Sarah is whole-heartedly devoted to service and faith. She infuses her personal practice and teachings with humor, boldness, and unapologetic authenticity.  She is passionate about serving up some yoga goodness to anyone who will take it — and to plenty of those who don’t even want it! — because she knows just how darn good for you it is.  Through her business, Semper Sarah LLC, she partners with non-profit groups to hold integrative health and wellness yoga fusion inspiration seminars, as well as hosts yoga&adventure retreats in Costa Rica.

Sarah has moved more than 30 times, has lived in and visited more than 40 countries, and currently keeps a landing pad in Denver with her three-legged wonder dog, Bailey.
A wanderlust junkie at heart and a goofball briefly disguised as a Intelligence Officer, Sarah is a zest-seeking, service-giving, adventure Jill-of-all-trades, life-lover looking to inspire you to just roll with it and then some! 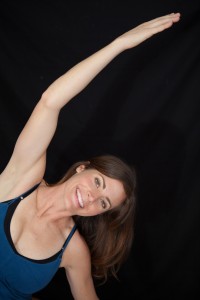 Last week, I opened up the discussion about “Primary Food” and “Secondary Food” in regards to what truly, fully nourishes us besides just food.  While I do plan on elaborating on each of the four elements of Primary Food in future blogs, I wanted to take a little time to make a tiny divert – although, since yoga is one of my major “primary foods,” it’s actually in keeping with the theme! 😉
I hope you enjoyed what I shared with you above because, whulp, I am humbled, honored, and downright thrilled about having been asked to give a TEDx-style speech at the Boulder Colorado Yoga&Music Hanuman Festival on June 15th.  This is such a huge hooray for lil ole me to be included among some big ole yoga greats and true inspirations.  In addition to being a part of the Hanumission Inspirational Talks in June, I was the featured presenter in this week’s Hanuman Festival Newsletter.

Although my main bio is on my “speaker page” for the Festival, for the newsletter I was asked to do this juicy write up….So I divulged this something special for me to you because even if you know me, you were bound to have learned a little somethin’ somethin’ about me you didn’t know before.

If you’re in CO, consider attending this amazing festival in beautiful Boulder this summer or making a special trip just for fun 🙂  Deals on their three-day passes expire today!