First and foremost, thank you to Anu Bhagwati and all of the staff at Service Women’s Action Network who afforded me the opportunity to speak out.  Also, thank you to Nancy Redd for running a compassionate interview and Troian Bellisario for her questions and sincere care to learn more about the realities of this crime.

Anu and I are introduced about 15 minutes into the segment.  The image above is hyperlinked to the video, or you can click HERE

As news continues to break about sexual assault in the military, victims of these crimes are becoming more vocal in their effort to seek change in the way the cases are handled. On HuffPost Live Tuesday, U.S. Marine Corps veteran and military sexual assault survivor Sarah Plummer shared her story. Speaking to host Nancy Redd, Plummer described the re-victimization that occurred as she had to recount her experience over and over up the chain of command. Plummer said the judicial system “falls flat on its face” in handling these assault cases, likening it to “getting raped by your brother and having your father decide the case.”

“It truly is that intimate of a setting sometimes,” Plummer said. “These are people we know like brothers and sisters and our commanding officers are like father and mother figures to us. How dare we expect them be able to handle a criminal case without bias?”. 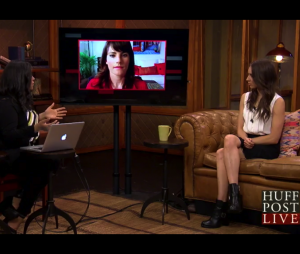