Always TRYING to look up…..

Since I last wrote four days ago, things have continued to improve.  Starting the week off, Sunday, by “looking up” (at God), really helped to get things going in the right direction.  Now, the rest of that day wasn’t particularly spectactular, and it ended up being too muddy to go mountain biking, but I got a lot done, and Pete got home safely that night from his Wiscosin “guys weekend” camping trip, so it was a good day.

Monday morning I got up at 6am to go to a yoga class here at the apartment complex’s gym.  I didn’t sleep AT ALL Sunday night, so I “woke up” on the wrong side of the bed, did not feel like working out, wanted to punch my pillow out of frustration over not sleeping at all, and forget about the yoga class I signed up for.  But, before I could roll back over, I literally jumped out of the bed and ran to the class before I think myself out of it.  Turns out I was the only one who showed.  haha!!  Although it wasn’t the most challenging yoga I’ve ever done, that was fine by me because it did exactly what I needed it to: cleared my mind, re-energized my body, and got my head back on straight.  I woke up like a sour puss and needed an attitude adjustment big time!….and it always amazes me how well yoga does that without even trying 😉  The rest of my day involved compiling some BreauxCo orders, computer reorg, visiting a couple boutiques in New Albany to pimp the BreauxCo line, and then off to footie practice with the Jills (The Columbus Jillaroos on FB http://www.facebook.com/#!/pages/Columbus-Jillaroos-Australian-Rules-Football-Club/133878553293534  ).  Yet another rainy stormy day in Columbus actually turned into a really nice one, so as usual, all that fresh air really revived me. 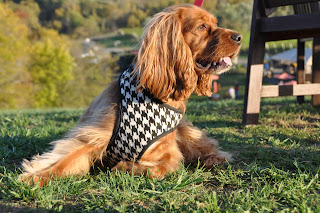 Tuesday morning I decided to start with yoga again, only this time I did it in the living room using a Rodney Yee DVD.  No joke, Bailey always tries to do yoga with me when I do it at home!! HAHA.  Gives more meaning to the pose “downward dog,” huh???  Later I had a meeting with a boutique about BreauxCO, then back home to enjoy lunch with Pete, another boutique meeting about BreauxCo, then knocked out some good writing at the New Albany Starbucks.  Sitting in this Starbucks is like a little time warp for me…..It takes me straight back to my Starbucks hangin’ days in the late 90’s in Centreville VA.  First my sister worked there (when it was like “oh my gosh!!  our town got our first Starbucks!!”) in the early/mid 90’s and I’d hang out with her because I was the monkey-see-monkey-do lil sis, then my Dad worked there right after he retired from like 23 years in the Air Force, and then I worked there briefly my senior year in high school!! hahah.  Anyway, the Starbucks here is like that one in Centreville – everyone knows everyone’s names, their kids’ names, what sports they play, what they’re up to, etc etc.  It’s so cute.  Anyway, later that night I finally had a great work out!!!  i’d been feeling like crap again for more than a week, so a good pump up sesh really got the positive juices flowin for me 🙂
Wednesday (yesterday) I spent the entire first half of the day dealing with house crap again 🙁 🙁 Uggghhhh!!!  It’s very clear now that Pxx and his attorney have withheld information, lied, and effectively stolen thousands of dollars.  That’s about all I want to say about it for now.  In the afternoon I used a sweet little Living Social coupon for a facial (only the second one in my life!) and loved it.  So that was a nice little treat.  Then, I headed over to the Starbucks and made some awesome progress on one of my book proposals!  Again, a rainy day somehow turned into a lovely evening, so as soon as I got home, I threw on my running clothes and shoes and darted out the door.  I had a great run!!!  whoo hooo!!!! 🙂  and I love when my runs turn into really good “God talks,” too….definitely feel closest to Him when i’m outdoors and active:)  Anyway, then Pete and I went to see the movie, Bridesmaides.  WOW!!  That was HILARIOUS!  I was cry-laughing nearly from the get-go.  Had a couple emails waiting for me after the movie from Britt’s dad with some awesome advice on the house situation…..which made me happy to have that great advice, but got my mind racing.  So, even though I was tired and ready for bed at 10pm, I didn’t fall asleep until almost 2am b/c my mind was racing!!  Hey Mom and Dad, thanks for those insomnia genes!! (Bec, I know you hear me!!)
Thursday, today, up at 6am for a morning “bootcamp” class.  Um, ya, lets just say (having been to bootcamp myself), this one didn’t quite fit its namesake! haha.  Oh well, it was a decent workout and it was good to get the blood flowin first thing this morning.  Then, I had to drive Pete to the airport so he could fly off to Atlanta for a two day work conference.  Back home to spend hours on the phone and email with MARFORRES sorting out orders issues from last year and figuring out how to avoid the same problem again this year.  (snore) Then, blerg, more house emails to draft up.  I did manage to get in another free teleseminar this afternoon, though, so that was cool; it was all about publicity and marketing stuff for books.  Again, though, these things are like little teasers for the product that the speaker is selling.    And now, here i am, typeity type typing at my computer, with Bailey literally on my feet, and me looking out the window wondering how another crappy day weather wise looks like it’s turned into a nice afternoon.  I’m not complaining!  I gotta head off to (guys) footie practice here in about an hour and get me some fresh air!! 😉
Tomorrow – my goal is, if possible, don’t get bogged down with CA house stuff.  Make more progress on the writing ideas that have been bumbling around in my head. Btw, Blog-newswise, I noticed that France, the Netherlands, Egypt, and Japan are now part of my audience.  Cool.