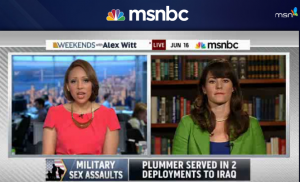 (the screen-shot images are hyperlinked to the video)

Visit NBCNews.com for breaking news, world news, and news about the economy

I gotta be honest, folks. I was SUPER nervous about this interview for some reason on Sunday and felt like I had serious brain fog all weekend. (Plus Mara was talking really fast! LOL)  In retrospect, I see that my self-care regimen had fallen off track a bit the last two weeks, and with hindsight being 20/20, I now recognize the effects of that.  I hope, though, that my comments still gave voice to others who wish to speak out, as well. There is so much to say about the debate over removing criminal cases from the military chain of command, and I just want to clarify/elaborate on a few comments I made in my interview with Mara Schiavocampo of MSNBC:

1. Take assault cases out of the military chain of command: I agree with Senator Gillabrand on this one.  We need impartial (and specially-trained) people to be the final word on these cases.  As the system currently exists, commanders – who who typically know one or both of the people involved in the investigation – are the ones with the final say-so on criminal cases.  Although commanders attend various legal training schools throughout their careers they are not lawyers.  Moreover, our military leaders may be dedicated and determined, but they are not impartial.

Furthermore, our allies have already taken measures to remove rape cases from the chain of command. In Israel’s case, reporting went up 80%! (Increased reporting is considered a marker of success).  Yet none of our US military commanders knew our allies are already leading the way in this regard.  They continued to blindly argue that everything must stay within the chain of command.  As I’ve said before, keeping these cases in chain “is like being raped by your brother and having your father decide the case.”  Military units are like family. It’s not humanly possible for commanders to be impartial.

2. “Chain of command is a vital part of military structure” – Yes I agree, it is, but to a point.  Chain of command defers to other experts in everything from medical issues to road repairs, yet they feel like they have to keep a death-like grip on these often complicated criminal cases?  It does NOT make sense!  We are not asking for all cases to be taken out of the chain of command.   Misdemeanors and command climate issues should remain with in the command, but criminal cases like rape and murder should not.

3. A measure was approved making it a crime to retaliate against those who report – Great, however, the culture still permits retaliation and harassment because generally speaking, the military leaders are still trying to train their way out of this problem, and are keeping it in the hands of people who perpetuate a rape culture.  Therefore, there must be prosecution on a larger level to deter the crime in the first place as well as to deter the subsequent retaliation that often follows and ranges from repeated violence to career decline. If offenders know they will simply get a slap on the wrist, if that, then these new measures are just another round of platitudes and not taken seriously.

5. How did it effect my career? – “I left for a mix of personal and professional reasons.”  Yes, but there’s more to it than that…I’d dealt with the rape on a personal level, but remaining in the Marines and military culture meant I still had it thrown back in my face on a regular basis for a variety of reasons I won’t elaborate on here.  The most tangible effect on my career occurred nearly at the outset when I was “medically disqualified” from starting flight school in Pensacola FL because I answered honestly during our our first major round of medical exams that I’d sought psychological counseling after my rape.  Counseling sought, by the way, after my then-commanders had assured me I’d suffer no repercussions to my career because we were a modern Marine Corps (in 2004).  Long story short, it didn’t matter how “modern” the Marine Corps thought it was; although I already had the equivalent of my private pilot’s license, I was banned from flight school.  I was not suicidal, homicidal, or taking any drugs, nor did I have any disciplinary or performance issues; I’d simply utilized the mental health resources available to me as a Marine.

6. The core issue – WHY is this happening? – because there has been a basic leadership failure.  Nearly every Military Commander on the Senate Armed Services Committee hearings two weeks ago said both “It’s not happening in my unit,” and “Keeping it in the chain of command works in my unit.”  Both statistical and anecdotal evidence definitively shows otherwise — it’s happening in nearly ALL units and people (male and female) are afraid to report within their immediate chain of command!  So then, who’s unit is “it” happening in?! As military commanders we are taught leadership starts from the top…if the heads of all the services are saying it’s not a problem for them, then they are either terrible leaders, ignorant, or delusional.

I think it’s time to get real about this.

I am a corporate and personal holistic health & lifestyle coach and yoga instructor because these practices have been CRITICAL in healing after my own traumas.  Now I teach these healing arts and instruct others around the world through my “Just Roll With It“ workshops, keynote speeches, retreats, and book.

Would you like to join me in COSTA RICA?  Only 8 spots remain for my retreat 20-26 July. Deepen your practice in paradise!

Morning practices will be enlivening, powerful, & dynamic and led by the lovely Lisa Schlelein Theis and tunes spun by “DJ Cosmic Professor.”

Afternoons will be filled with non-yogic adventures designed to challenge you and open your mind, body, and spirit. All meals are included and are local, organic, yummy, and healthy. Integrative nutrition counseling, as well.

Evening yoga lead by me will generally be gentle, restorative, calming. Not your typical “yoga retreat.” PURA VIDA on the west coast of Costa Rica.

Seriously great for beginner to expert yogis, wanderlusters, and adventurers. Join us at the Costa Rica Yoga Spa July 20-26th!  🙂