Since I seem to always be traveling, this Semper Sarah entry is about Always Traveling Sarah 🙂
Day 1 of our Mendoza portion of the trip, Margie and I decided there’d be no half-a$sing things.  As soon as we dropped our bags off at our hotel (that we scored an amazing deal on this 4 star place (more details later)), we went into town to book an appointment for paragliding.  I think we only paid something like $80?? Whatever it was, I remember it being an awesome deal! Anyway, when Margie and I arrived at this “base camp” where all the hang gliding guides were waiting for their innocent tourist victims, we immediately sighted “the crazy guide” among the group. This guy was carrying on like a nut!  He was like a cartoon version of some sort of South American Gumby-meets-Garth from Wayne’s World character.  We chuckled to one another “I feel sorry for the person who gets THAT guy.” Well, as I always say: “It’s all fun and games till someone loses and eye.”  That’s my way of telling you, yup, you guessed it, about 20 minutes later when they partnered everyone up with a guide, I got Loco Lester!  This was both funny and NOT funny to me – I had to literally jump off the side of a cliff with this guy and trust that he knew what the heck he was doing!!!  Turns out he was actually a pretty cool guy.  The video shows a snippet of me and Margie (nearby) before he took us through some crazy drops and turns, and when we finished up he gave me the biggest hug and was so cool about the whole thing.  It was one of my favorite Argentinian adventures. 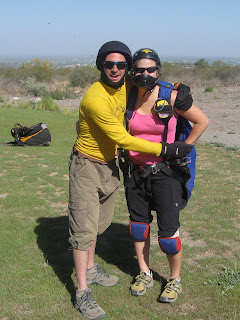