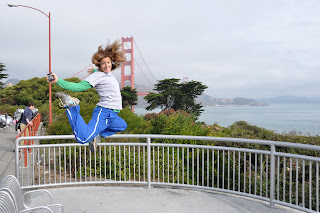 Wow, I really keep lucking out with all these “s” words don’t I?? 😉 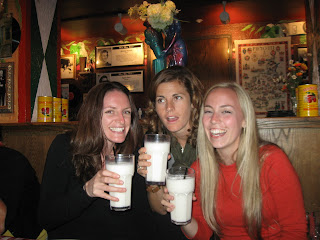 Ok, so, I’ve been doing less of the updatey blogs and more of the deep thoughts type posts lately, but today I feel like I gotta do a little quickie update.  I’ve been away from the blog for a bit because I’ve been on the road again.  As much as it may seem like it’d be easy to write anywhere, it’s harder than you’d think.  I’ve found that having a specifc space in which to write, where I’m mentally committed to composing a piece, is crucial to my writing success.  Thus, having spent nearly two weeks in San Francisco at the beginning of this month, I’ve been a bit distracted.  Even while there, I bounced around constantly.  And today, I’m about to get on the road again – this time, to drive to NC to visit my parents for the weekend.
So, to backtrack…I arrived in San Francisco on Friday the 2nd after catching a 5am flight out of Columbus….then spent SIX HOURS waiting in Charlotte for my connecting flight after multiple delays due to maintenance issues with the plane.  (Yes, I’d rather wait and fly in a safe plane than fly earlier in a broken one).  I got to SF, grabbed one of the shuttles to the hotel, dropped my bags in my room, then went for a jog along the water from the Embarcadero area toward pier 39.  It was windy, but sunny, and I was thrilled to be in this awesome city for the first time.  Since I was there to compete with the Washington DC Gaels in the North American GAA Finals (aka: Nationals for Gaelic Football), the rest of the girls were all at the fields that afternoon watching other games or competing in camogie when I arrived, so I had a little bit of time to myself before our team dinner that night.  (see photo above of Niahm, me, and Holly enjoying a pregame (large) glass of whole milk)
Saturday morning we had an early start since our game was at 9:30am on Treasure Island.  Upon arriving at the fog-covered fields, we stood around awhile for check in, then walked to our pitch, warmed up, and were ready for game 1.  We had the odds stacked against us by competing against San Francisco’s Junior A team who were mostly all Irish and apparently had like 10 Irish sanctioned players (not sure if I’m getting the terminology right).  We did lose, but it was a competitive game.  Afterwards some of their players even told one of our captains that they couldn’t believe we were an all American team because we played so well.  Other than getting punched in the teeth and elbowed in the temple, I really enjoyed playing again.  My Gaelic skills were definitely a bit rusty though, and I was ashamed of some of my kicks/shots, but considering I hadn’t played all year, I decided not to beat myself up about it.  Oh, I scored a goal on a penalty kick! I almost forgot about that.  Haha.  PK’s are rare in Gaelic, so that was cool, too.  All in all, I had a blast getting out on the field with the DC girls again.  Anyway, the rest of the day was spent loitering, watching games, drinking, socializing, etc…..typcial Irish activities, ya know 😉 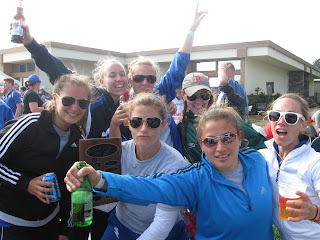 Sunday morning was another fairly early one, but not too bad since our game was at noon.  We went earlier than neccesary for our football game, though, since about half of our team also plays camogie and they had a morning game.  Unfortunately, our camogie girls had a heartbreaking loss in overtime to Denver, then had to go straight to our football game.  This time we played against Chicago (also, a predominately Irish squad).  WE WON! 🙂  Hooray!  It was a consilation game, but we won The Shield nonetheless and the Irish take every match seriously 🙂  I got thrown in the “sin bin” for 10 minutes in the second half for a lame foul, but thankfully the girls held strong and we won by a mere few points.  A win is a win, and we celebrated accordingly at the club (see above photo with me holding the Shield). The men’s football team won their Shield, as well.  Later that night, off the Island, the Gaels continued the party in their typical fashion by storming the San Francisco bars and clubs till the wee hours of the night.  Go on the Gaels! 😉
Come Monday, I was straight wrecked from all the football, socializing, and dancing….as I think everyone else in our hotel was, too!  haha.  But that sure didn’t stop a small contingent of us Gaels guys and girls from checking out a few local pubs before all going our separate ways later that day.  I had such a blast hanging out with the whole crew again, and after the end of that whirlwind weekend, said my goodbyes that evening and cabbed to the airport to meet up with another friend, Kelly, who lives 2 hours south in Monterey (but who flew into SFO that evening as she returned from her Labor Day weekend out of town). 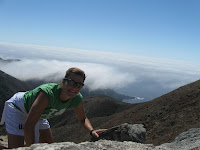 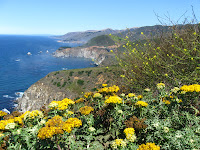 From Monday night till Saturday morning I stayed with All Armed Forces Women’s Soccer friends, Kelly Bowen and Chrissy Acojedo, in their lovely home in Pacific Grove.  I went for a long run all along Sunset Blvd and Asilomar Park one day, drove Rte 1 south to Big Sur National Park and hiked there another day, went to the Farmer’s Market, hiked Soberanes trail in Garrapata Park, went to Carmel by the Sea, ate awesome food, tasted wine, and more.  It was an awesome week and Chrissy and Kelly were great hostesses!  Thanks, ladies! 🙂 And on Friday of that week, I drove up to San Jose to check out Palmer Chiropractic’s West Coast Campus.  I am so pumped to (eventually) start chiro school!!
Saturday morning Chrissy and I drove up to San Francisco to link up with Pete and his friends, Kathy and Mike.  Wow, we had another incredible few days!!  Saturday we stopped at Golden Gate Park on our way out to Sonoma and Napa for a day chock full of wine, food, and fun.  Sunday we drove to Stinson Beach for a moutwatering brunch before yet another great hike, this time through Muir Woods.  After that full day, Kelly was sweet enough to drive all the way up from Monterey herself just to hang out one more time before I went back.  The whole group of us enjoyed some drinks around town near Kathy’s place before Chrissy and kelly had to getback on the road to go home – they had work the next morning after all! 😉  Then, Monday, Pete and I took the ferry out to Alcatrez, spent several hours touring that, and walked around the city.  We linked up with Kathy and Mike for dinner and drinks before catching a red eye back to Ohio that night.  By the time I got back home Tuesday morning I was wiped out! 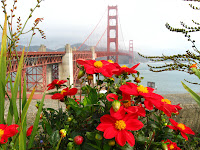 In summary: I LOVED San Francisco, I want to move there, I had a blast with all the Gaels, I had a blast with Chrissy and Kelly & Kathy and Mike who were all great tour guides and hosts, I’m pretty sure I want to go to Palmer West for Chiro school, and four days later I’m only now getting rid of my hang over! jk 😉  Bye bye, Cali and friends – see you again soon!! 🙂 🙂
2020-07-09T10:19:06-05:00By Sarah Plummer Taylor|Semper Sarah|0 Comments