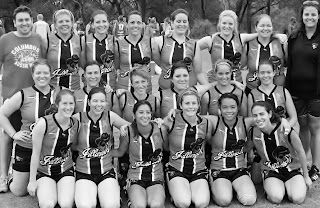 The leaves have turned, the air has chilled, and the sidewalks are wet with pre-winter weather.  Fall is closing in on the Northern Hemisphere and closing, too, is my fantastic football-filled (nearly) full-time sports season of 2011.  From futbol (soccer), to football (Gaelic), to footy (Australian Rules), my year was overflowing with athletic adventure. I couldn’t feel more blessed to have the opportunity to combine the things I love so much – friends, sport, and travel – on so many occasions throughout this year.
I’ve already written wrap-up pieces to the Military World Games in Rio de Janeiro Brazil in July where I was reunited with dear Dutch friends as well as my US soccer gal pals, and Gaelic Football Nationals in San Francisco in September where I rejoined my DC Gaels team and visited soccer friends in Monterey afterwards, so now it’s time to pay homage to the Australian Football gods and talk a bit about the USAFL Nationals in Austin, TX this October after which I linked up with soccer buds, Duncan in Austin and Jen in San Antonio.  {Yawn. I had to take a nap after that sentence. ;-p Ok, I’m back now.}
The Columbus Jack and Jillaroos combine sport with social life, kindness with competition, and planning with fun, all with aplomb.  Before I even moved to Ohio, through emailing with Sara “Mouth” Matheson (Jillaroos team leader extraordinaire) I got the feeling I would love Aussie Rules Football and my future footy teammates. I was so certain of this that I registered for Nationals before even relocating from DC or ever touching an Australian football! J  Then, less than a week after moving in, I made it to my first Monday afternoon practice.  As I jogged across Tuttle Field toward a huddle of girls, I felt no apprehension about joining the crew. Later that week, I attended a men’s practice, feeling equally comfortable there.  In a setting where the norm would likely be exclusivity via inside jokes and alienation via cliques, both teams broke the mold and, instead, warmly invited me into their circle.  Even though a large contingent of the male players, for instance, have known each other since high school or earlier, not once did I feel like the proverbial sore thumb among these long-time buddies of the Columbus suburbs.  Pete, too, expressed these sentiments.  On several drives home after practice and/or after hanging out at team pub, Byrne’s, we both remarked how welcomed we felt among the group, how nice everyone was, and how we never felt excluded.  We moved here knowing no one, yet quickly had a group of friends in a big city.

Fast forwarding through the season from May, through June, July (I was gone all month), August (highlight: Jills’ Toronto trip), September (highligh: Jacks’ Raleigh trip), and various home games and “metro” scrimmages, we come to Nationals in Austin this October.    I missed Game 1 L but stepped foot off the plane from Chicago with enough time to power walk from the gate to the curb, grab a cab, and run to the field to make it for the Jillaroos second game.  We won! J   I was travel-weary and foggy-headed, disappointed in myself for not contributing as much as I would have preferred, but happy to have made it there in one piece and to link up with the Jillaroos as well as meet the girls from other cities who combined with us to make one big team.

Pete missed his first game, too, but had plenty of time to prep for the Jackaroos second game.  The break between our matches allowed a window of opportunity for Jills teammate, “Kujo,” and I to grab authentic Aussie pies and Coopers from the beer tent, chat a little, then get back to the field to watch the Jacks play.  Minutes after I got there, Pete ran off the field, holding his face, hands covered in blood – he’d been elbowed in the eye.  So, off we went to the medic tent (after I shared some choice words with the bloke who hit him) to get Pete cleaned up and bandaged, back to the turf to watch the second half, then off to the ER for a few hours and five stitches.  By the time we got to the hotel that night, I was spent.  Most of the Jacks went out on the town and Jills went out to dinner, but I crashed in my hotel room.
The Sunday morning rain ushered in bad news: the Jillaroos had missed qualifying for the semi-finals by ONE POINT.  In a game that often reaches into the 20’s or 30’s, or even as high as 100, one point is a crazy small fraction of a difference.   I was bummed out that we didn’t earn a slot to compete for the finals L Regardless, we were all excited to play that day.  The men, too, despite their hangovers, were revved up for their final match which, for me, was “Game 2.5.”  Yup, Coach Fish asked me to suit up in a Jacks jumper and play with the men! Nearly as soon as I took the field, Derek and I co-tackled an Aussie – it was great! Haha.  Other than that, I didn’t contribute much to the game, but it was still a blast to get out there on the pitch with the boys.
I left the men’s game with enough time to run across the park to catch the last ten minutes of warm up with the Jillaroos.  Lucky for us, we had one more new addition to the team that day, a stellar gal who plays for the US Freedom, Judith Stein.  We were amped up and ready to win…which we did! J  It was a great game.  The entire team played with skill and heart, and gave a performance to be proud of (in front of the throngs of drunken boys and girls at the beer tent which bordered our field J).  I was much happier with how I played that last game; I scored three goals and one behind for a total of 19 out of our 38 points.  I even hit the goal post two more times, achieved an on-the-run dribble, and gave it my all despite my swelling calf from a massive Charlie horse I got in the first five minutes. When the final whistle blew, though, we raised our arms in victory, smiled proudly, and clapped one another on the back with “good jobs” and “awesome play.” Spectators cheered for us…as they well should, for a nearly infant club came to Nationals and vastly improved their record from the year before.  This two year-old team, which seamlessly intertwined with Boston and Baltimore, went from zero wins to two convincing ones! Despite not even making it to the semis, we received notoriety through our team work ethic and via our Boston teammate, Emily Riehl, who deservedly won the fair play award. Well done, ladies. J
Of course even though we’d played our last game, there was more footy fun to be had as the crowd grew and people cheered and booed for the men’s Division 1 Final on the main field and the famous 6th Street of Austin was patrolled later that evening.  Two days and two nights were jam-packed with great memories, new friends, and fun times.  Above all else, though, I hope my words pay tribute to the Columbus Australian Rules Football Club, the individual members who work so hard to keep it humming along (Sara, Scooter, Alan, Chet, Krause), the USAFL at large, new friends (Emily, Andrea, Kristina, Renee (the list really could go on and on), the causes it contributes to (Breast Cancer), the opportunities allowed (me being the only “lady player” – as the umps called me – in a Men’s Division 3 match), and the bonds forged.  For those of you who couldn’t make it, we felt your absence. I’ve played sports my whole life, but it is not every day, not even every year, that a person comes across a club quite like this.  Thank you ‘Roos and USAFL, too 😉  It would be an honor to be a part of this fraternity for years to come.

I hope everyone got home safely. God Bless and MUCH love to all footy players and spectators from this weekend, 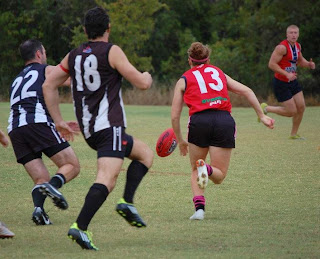 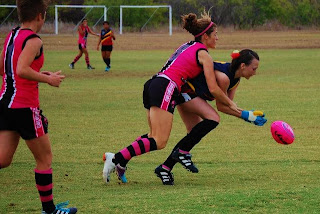 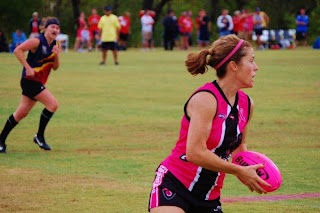