Stephen Covey Passes Away, and Sarah Talks about Life, Mountain-Biking, and Resilience

The world lost a wise spirit today.  Many were shocked to hear that the beloved author was 79 years old at the time of his death since many fans – myself included – assumed he was younger than that.  Why?  Was it his youthful aura and timeless smile on the cover of The 7 Habits of Highly Effective People?  Was it the sage and simple advice given in countless books and articles? Or was it his deep love of family and friends (with 9 children and 52 grandchildren surviving him) that kept him young at heart?

Not knowing the man personally, I can only presume it was a combination of all of the above and a lot of other stuff I do not know about him.

But what does the “highly effective” author have to do with mountain biking?

Furthermore, what does he have to do with my previous declaration (via blog, of course) that mountain biking is a metaphor for life?

Moreover, what do Stephen Covey, mountain biking, and dying all have to do with one another?

My sister forwarded me an article this morning which explained that Stephen Covey died from complications from a bicycling accident that happened this April.  Besides the fact that I am a Covey admirer, there is another good reason why my sister sent me this article today and it has to do with my sister being very concerned about me. 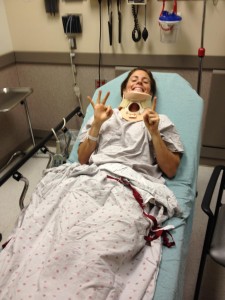 A week ago, on my birthday, (ya, I’m flashing a “31” in the photo above) I spent about ten hours in the Emergency Room after taking a nasty spill in the Ohio woods on my – you guessed it – mountain bike.  I suffered a concussion, sprained neck, multiple contusions, and had to get seven stitches sewn into my right calf. 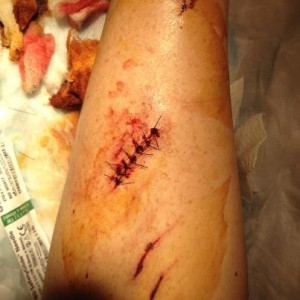 Instead of being pissed that I spent a sunny birthday afternoon inside a windowless ER ward, I found the event as entertaining as my friends did.  When I posted a couple pictures on Facebook displaying the aftermath of my accident, comments looked a little something like this: You don’t mess around when celebrating, OMG, Damn Marines, You do realize you are mortal right?, Holy crap, Comes with the territory of living to the fullest, You are one wild living girl, You are truly a champ, Love your attitude, You are one tough cookie, and Normal people check into bars and restaurants for their birthdays but normal is boring.  Of course there were expressions of concern and sympathy, too, but even those were light-hearted.  All in all, despite a little alarm and shock, I thought it was funny…mostly.

The thing is, it really could have been worse. Even the post-CTscan, brief scare of “we see a subdural hematoma (aka: a small amount of bleeding) in your brain” didn’t feel like a “scare” to me.  Ask Pete, I literally laughed when the doctor told me this news and then asked me if I wanted to stay for an MRI just to be sure.

“Oh just a little bleeding on my brain? Sure, let’s get a second look at that, doc!”

When Doogie Houser told me it would probably be another three hours until my spin on the MRI wheel of fortune, I settled into my hospital bed, asked for another glass of water, and had Pete pass me my book.

Turns out, the bleeding they thought they saw, was not bleeding.  Phew!

Honestly, I felt ok.  Ya, just ok, not great, but not awful either.  I was released and allowed to go home.  It was nearly midnight.  I was a little loopy, and definitely doped up on the meds they administered in the ER, but all in one piece so to speak ;-p.  I was happy to be alive, grateful to go home, and I kept telling Pete how much I loved him and wouldn’t stop holding his hand and hugging him.

Monday (the next day) I was supposed to be on the road to Kansas (a fourteen hour drive) by around 8:00am. I decided against it and allowed myself to sleep in a bit instead.  I had been prescribed a heavy dose of narcotic pain killers, but I never picked the meds up.  I opted for a couple Advil, taking it easy, and a massage that afternoon.

Tuesday I drove 14 hours to Kansas.

Wednesday I had a headache and felt like I’d been hit by a car (and yes, I actually know what that feels like).

Thursday morning I drove 6.5 hours to Colorado and moved into my new apartment.  After dinner that evening, I felt the worst I’d felt since my accident.  Let’s just say, I had the sensation of a flaming ferret trying to crawl out of my skull (and no, I don’t actually know what that feels like).  Ok, a smidge on the exaggerating side – “there were a thousand fire fighters in that house, Dane!” – but I didn’t feel right.  Thankfully, by Friday afternoon, I felt a bit better, and by Saturday I felt good. 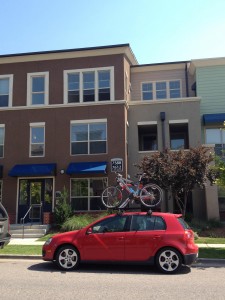 Speaking of Saturday, as my welcome-to-Denver present to myself, I played in two Gaelic football games that afternoon.  I’m not sure if it was the altitude, heat, or the fact that I was probably still mildly concussed, but I wouldn’t say it was one of my best performances.  I did have a blast, though, because I was in my element.  To say that I love fresh air, sunshine, sports, and new friends would be an understatement.  I feel FULLY ALIVE when I am outside, moving, and socializing.  The Denver Gaels (and Bulldogs (Aussie Footy gals)) are straight-up great, by the way! I am super-duper stoked to get to know these stud-horse girls and play tons of Irish and Australian footy with them all summer and fall.

Oh ya, I just wanted to state something for the record: I’d rather die living my life to the fullest than die wishing I had.

I know I worry my family sick sometimes.  Last Sunday was my 13th concussion. On top of car accidents (both being in one, and being hit by one), getting struck by lightening, and suffering a mysterious “mini-aneurysm” or “min-stroke” (docs never gave me a straight answer) almost two years ago, this fall in the woods was cause for at least some brief concern.  My family sends me articles about football players, soldiers, and – now – famous authors dying from some form of TBI (traumatic brain injury).  They furrow their brow and tell me “The is serious, Sarah” when I chuckle and say “ok ok, I know I know, but I’ll be alright.”

I have continued to laugh about my accident from last Sunday.  It’s not really funny, per se, but why would I chose to stop living my life and enjoying what I do because of it?

Maybe some people think I am reckless.  Maybe I think some people are boring and scared of life.

This past weekend, the football girls probably thought I was a whack-o for playing in a contact sport 5 days after a concussion with 7 stitches still in my leg.  (A few girls called me a “bad-ass,” but me thinks they might have really meant “craaaaazy” ;-p).

Ok, do I think it would be funny to die young, with a bleed-out in my brain in the middle of the night?  No.  Of course not, and I sincerely hope that does not happen to me.  But I refuse to stop living my life the way that I do.  I am not reckless (I had a helmet on) and I do what I can to prepare for the events in which I place myself.  But I will not stop running because of scoliosis, arthritis, and herniated discs; I will not stop riding my bike because of multiple accidents; and I will not stop pushing the limits just because I “should take it easy.”… The same way I did not stop serving in the Marine Corps after being betrayed by friends and an institution I trusted, or stop laughing when told to pipe down, or stop loving after having my heart broken.  Perhaps you will scoff as you read this and mutter “cliché” but it rings true that it’s all connected.  It’s not a coincidence that I’ve been broken physically and keep getting back up – I’ve been broken emotionally and rallied just the same.  Because it doesn’t matter how many times you fall down; just get up one times many more 😉

I wrecked on my bike last week because I was having a good ride and got excited and ambitious. I wanted to push my limits.  I wanted to grow.  I tried to scale an obstacle on the Alum Creek advanced course that I’ve never taken on before. I lost my balance, and fell head first about eight feet off a platform and down a hill, with my heavy metal mountain bike crashing on top of me.

Did I make it over the obstacle that day?  No.

Did I fall and get severely banged up because of it? Yes.

Will I try it again and hope things go better the next time? Yes.

Like one of previous posts stated: Mountain-biking is a metaphor for life.  If you fall down, get back up.  In the literal sense, we get the metaphor; it’s clear.  But can you apply it to the mental or emotional areas of your life, as well?  If you want more resilience in one area of your life, can you start practicing it in another?