The Beginning of “the Summer of Sarah&Britt” 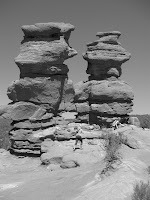 Sunday morning, June 12th, we were up nice and early after a not-so-restful night’s sleep.  A wonderful 3.5hour hike through Garden of the Gods Park in Colorado Springs was a great way to get the blood flowing, though!  Britt’s co-worker and her dog lead the way, which is a good thing because I think Britt and I left to our own devices would have definitely gotten lost once or twice!  So, “Schwany,” Britt’s friend, who was very familiar with the trails, took us to all the major highlights: the twins, the kissing camels, etc.  I loved it!

After our hike, we hit up Starbucks, went home to shower off all the sand and dirt, then began cooking our masterpiece Lunch-Dinner, aka: Linner.  But first we snacked on freshly made caprese salad,…then some avacados (one each)…..then began the longest roasting ever of fresh artichokes……then went to the store to get the chicken…..came home, watched the Young Victoria (one of my all time favorites!!!) then cooked the whole scrumdidilyumptious meal of parmesan chicken and asparagus and artichoke, ate, enjoyed, hung out, relaxed, and went to bed at a decent hour.  A great little day 🙂

MANIC MONDAY – June 13th – yup, manic indeed!  we spent the entire day running to and froe at the Air Force Academy to get my medical physical and loads of fun paperwork done in time for the Marine Corps to cut me my orders for the All Armed Forces Soccer Training Camp this July  The details of that morning and afternoon are not worth describing!  So I’ll just skip to our afternoon/early evening….

Britt drove us to Manitou Springs which is this quaint, almost European-looking little town at the base of Pikes Peak.  Our timing wasn’t the best as most of the shops were shutting down as we got there, but this didn’t prevent us from taking a little stroll and enjoying the scenery.  From there we drove to downtown Colorado Springs for an outdoor dinner at (darn can’t remember the name) where the waitress definitely thought Britt and I were high on something because we could NOT stop laughing!!  I love times like that – where you don’t even know why but everything is HILARIOUS and you don’t care if people are looking at you funny 🙂  This slap happiness continued through the night ….our appetizers were great, but the main course was a bust (which made us laugh)….so lef that place without having eaten a real dinner and walked around  a little.  We decided to stop for some sushi where, yet again, we told stories and swapped advice on different things and continued to laugh so hard it hurt.  We made grand plans of trying out for the (real) National Team at some point in our lives (admittedly, it’s getting a little late for me ;)), figuring out how to get me (and Pete) a job out there so I can live in CO, ideas for future visits, and possibilities for more international travel fun for us later this summer.  We, thus, deemed this visit as the beginning of “the Summer of Sarah&Britt” because of all the fun we did have and was yet to be had this summer.  We’ll see how much of it materializes!….but it’s good to have dreams.  So, yup, it was a perfectly imperfect night! 🙂  plus, I got my ab workout for the day from all the laughing;)