By the time my set departure date ((Too Soon) Tuesday, 14 June) rolled around, I hadn’t quite figured out how to change my ticket without losing an arm and a leg or by sorely disappointing Pete and Bailey back home.  I was quite torn between staying in a place I love with a friend I love, where both the place and the person fill me with such a positive energy, and going home to see my man and pup that I love but to a place that doesn’t quite “energize” me.  (Sorry, no offense Ohioites!) To Pete’s credit, he was supportive of me staying or coming home.  However, I decided it was best for me to just head home as much as I wanted to stay in Colorado and soak in the fresh air, mountains, and non-stop laughter from my hoot of a friend, the little sister I never had, Britt.
I got up in the morning and went for a long walk and run; I felt yucky but was glad I got out and got moving.  Then Britt came home after working at the USAFA soccer camp that morning and took us on base to try to get something called an ISOPREP done.  Not worth going into the boring details on that, but it took up a chunk of the day until we basically had to get on the road to take me to Denver.
We made better time than we expected, so (random) we stopped at  Wendy’s to get frosty’s, sit outside, and chat a little more before taking me to the airport. The check in at the airport was a mess.  I was scolded for arriving only an hour early.  Um, what?!  Since when is an hour not early enough for a domestic flight???  and was told “your bag probably wont make it.”  Whatever, I made it through security and ran to my gate b/c that’s what they told me to do, and after I arrived sweaty, I saw the flight wasn’t even boarding yet.  Oh well.  So I killed a little time before boarding, and thank goodness the flight home was WAY smoother than the flight out.  …and, yes, my bag arrived in Columbus, too. 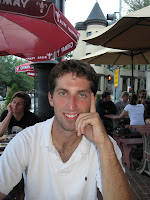 Pete arrived at CMH with a clean shaven face!!!   BYE BYE BEARDIE!!! he’s had a beard for about 8 months now, and even though I knew he shaved it off while I was gone, he just looks so different without it that I really had to adjust to his new look 🙂  As soon as I got in the car, Bailey squealed and wagged and jumped in my lap.  He is such a lovey puppy!  Upon returning to my apartment, I was greeted by a sweet surprise Pete had waiting for me: a super cute greeting card welcoming me home and two DVD’s I wanted (127 Hours (which I haven’t seen yet) and The Other Guys (have you heard my impression of Will Ferrell’s tuna and lion monologue?? It’s one of my favorites!)).  Sweet Pete got some major bonus points for all that 🙂